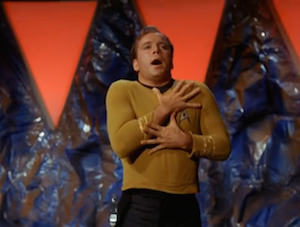 "Lungs filled with air again. To see again. Heart! Pumping! Arteries! Surging, with blood again. To feeeeeeel again. After half a million years..... to be again."
Advertisement:

The Enterprise's mission leads them to uncharted territory, hundreds of light years beyond the territories explored by any Earth ship, pursuing a mysterious signal that turns out to originate from a world dead half a million years, sent by an alien that calls itself "Sargon" and begs the Enterprise for assistance.

It turns out that Sargon is one of only three aliens who survived the cataclysmic war that destroyed the planet millennia ago, and only at the cost of secluding their mental energies inside of orbs and forsaking their physical forms. Sargon begs with the Enterprise to allow the three of them to temporarily borrow the bodies of three of the Enterprise's crew, that they can have bodies long enough to employ their hyper-advanced technology and create robot bodies to inhabit instead.

After much deliberation, Kirk, Spock and Dr. Mulhall agree to become the hosts for the three aliens. Unfortunately, Henoch, the alien who chooses Spock's body, decides he would rather keep an existence of stolen flesh and blood, and makes plans to sabotage Sargon's plan by indirectly killing Sargon and persuading Sargon's wife, Thalassa, to side with him.

Gargoyles fans will recognize this plot as the one re-used for that series' episode "Possession."