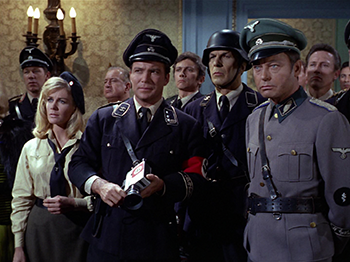 Ironically, the only blonde person here isn't a Nazi.
Advertisement:

The Enterprise crew are headed off to the planet Ekos to pick up famed cultural observer John Gill, with whom the Federation has lost contact for some time. In a bit of Hero Worship, McCoy and Spock share a poignant discussion about their relationship with the man, with Spock admiring Gill's take on historical events as causes and effects rather than that boring system of dates and events that normal history teaches us.

Things start to get interesting, though, when a nuclear interplanetary missile is launched at the ship from Ekos — technology that shouldn't even be possible for the planet's primitive inhabitants.

Taking high orbit over Ekos, Kirk and Spock beam down in local attire to see what they can find about this turn of events, only to be more baffled when a televised message reveals that not only is the planet an exact duplicate of Nazi Germany, but that John Gill is the planet's Führer. Ambushing a pair of Nazi soldiers in order to dress as the enemy, they attempt to infiltrate the Führer headquarters to get some answers, but are caught and brought in for interrogation. There, they meet a Zeon prisoner by the name of Isak, who explains that the planet had actually been a rather nice place to visit, during the initial rule of the Führer, but turned into a nightmare once the old Nazi prejudices came up - now the Ekosians are on their way to eradicating the inhabitants of their sister planet Zeon in much the same way the Nazis tried to eradicate the Jews and other hated minorities. Using crystal transponders embedded into their flesh, Kirk and Spock manage to free themselves and Isak, and escape into the underground that Isak is a member of. However, before they can prove to the underground that they're friendly, a Nazi task force led by a young woman named Daras — crowned a hero of the fatherland in the same transmission that revealed Gill as the Führer — comes in and shoots one of the underground, threatening to kill them all if they don't comply.

Kirk manages to overpower Daras, but is prevented from killing her by the man she shot; turns out, Daras is a member of the underground, and the raid was an elaborate test to see if Kirk and Spock are friendly. Deciding things are screwed up enough without worrying about the Prime Directive, Kirk comes out and tells the group that Gill is an alien sent to observe Ekosian culture, and that something has gone horribly wrong to make him interfere with the planet's development so radically. With the underground's help, Kirk and Spock break into the headquarters, once more, just in time to catch a televised message from Gill seemingly announcing a "Final Solution" to eradicate Zeon once and for all. However, with the help of a very reluctant (and late to the party) McCoy, they're able to determine Gill is actually being drugged and kept in a stupor; a quick Mind Meld further reveals his second-in-command Melakon has taken over, using him as a figurehead while he wields the real power behind the swastika.

With some drugs to help stimulate him into light consciousness, they're able to get an answer to the multi-million-credit question: why did Gill break the Prime Directive and use Nazi Germany as a template for his interference? As it turns out, Gill just couldn't stand idly by as the Ekosian people were tearing themselves apart by their barbarism, and thought the efficiency of the Nazis could be used to civilize them, if malice wasn't put to the fore, and it worked until Melakon took over. Eventually, Kirk manages to get Gill lucid enough to cancel the Final Solution order before Melakon kills him, who is in turn killed himself. With the Nazi planet now leaderless, all the other Nazis just step down without a fuss, and it'll be a breeze for La Résistance and Zeon to reform a whole planet full of Nazis filled with anti-Zeon propaganda.

The Fan Nickname for this episode is "The One With… The Nazi Planet".