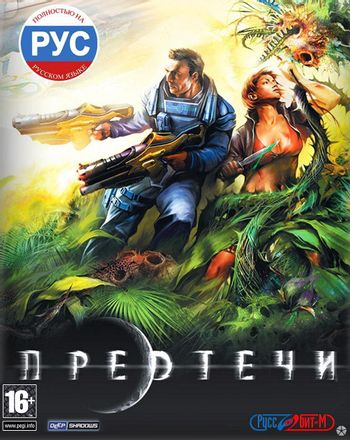 The Precursors (rus. Предтечи) is a 2011 game by Deep Shadows, the developer previously known for Boiling Point: Road to Hell and White Gold: War in Paradise. In it, the player takes the role of Treece Creighton, a young pilot of the Amarn race, who is fresh from the academy and is sent to work for the government of the Amarn colony at desert planet Goldin. After several missions, the Amarn's home planet Casilla mysteriously explodes and Treece is sent on a quest to find out how and why it happened.
Advertisement:

The game is a hybrid of a First-Person Shooter, Role-Playing Game, Stealth-Based Game, Wide-Open Sandbox and space-based Simulation Game. The player is free to navigate the open world on their own, trade with merchants or extort them for money, work for The Federation, The Empire, or La Résistance, investigate long lost ruins or just travel through space to land and play around in the various planets and space stations.