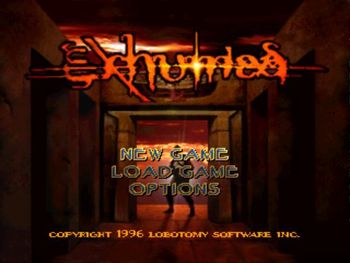 PowerSlave (a.k.a. Exhumed in Europe and Seireki 1999: Pharaoh no FukkatsuTranslation 1999 AD: Pharaoh's Resurrection in Japan) is a 1996 First-Person Shooter released for PC, PlayStation and Sega Saturn. It is set in Egyptian ruins and makes the player fight alone against plenty of demons and undead, making it a kind of Doom or Duke Nukem 3D in Egypt. However, while the PC version is a typical FPS of the time, the console version distinguished itself by being a first-person Metroidvania long before Metroid Prime came out.
Advertisement:

The story occurs in the end of the XXth century and puts the player in the shoes of a special forces soldier sent in Egypt (near Karnak) with a team to investigate weird rumors about monsters which appeared there and invaded the place. Their chopper crashes, and he is the only survivor. Later, he meets the ghost of King Ramses, who warns the hero of who the true culprits are: an alien race called the Kilmaat, who are using Ramses' corpse for some evil purpose.

After being unavailable for digital purchase for years, the PC version of the game was digitally re-released

on GOG.com by Throwback Entertainment on November 19th, 2020, with Throwback also working with

Not to be confused with the Powerslave album made by Iron Maiden (although the title track deals with Ancient Egypt too), nor the Death Metal band of the same name.