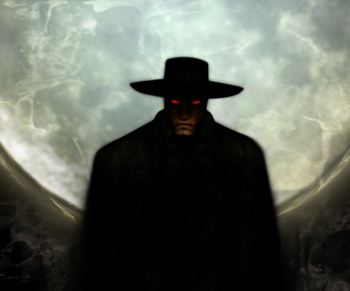 Our hero. A pleasant-looking fellow, isn't he?
"I LIVE... AGAIN!"
— Caleb, Blood
Advertisement:

In regions renowned for cruelty, Caleb was legendary. Born in western Texas in 1847, he had already acquired the reputation of a ruthless gunslinger by the age of 17. His bloodthirstiness took on a menacing new timbre not long afterwards, when he entered the Cult of Tchernobog, but the real massacre started when he was betrayed and discarded by his master, the Dark God Tchernobog himself...

A 1997 First-Person Shooter from Monolith Productions, based on the Build engine, Blood was one of the most unusual shooters of its time. It featured a mix of horror and deadpan humor, a charismatic Anti-Hero, an arsenal of exotic weapons and, of course, lots and lots of the eponymous red liquid. Playing as Caleb, a former pet murderer of an evil deity who was betrayed and transformed into an undead monstrosity, you go on a quest to avenge/harvest the powers of your former True Companions who did not manage to rise again and use them to wreak all kinds of unholy hell upon Tchernobog.

In 1998, a sequel was created; Blood II: The Chosen. Running on the new LithTech engine developed in-house by Monolith, it took place exactly one century after the first game, featuring the Cabal's attempts to kill Caleb and take back the powers of Tchernobog, while Caleb's disuse of the dark god's powers accidentally summons abominations from another dimension. Unfortunately, due to being rushed out the door, it released in a very poor state, and though it does have a following (including a very active modding community), it's rarely considered on par with the first.

Both games and their expansions can now be purchased digitally from GOG.com and Steam. An Updated Re-release of the first Blood, subtitled Fresh Supply, has since released on GoG

as well, courtesy of the folks at Nightdive Studios.

Hold on tight, these tropes might get a little... bloody: