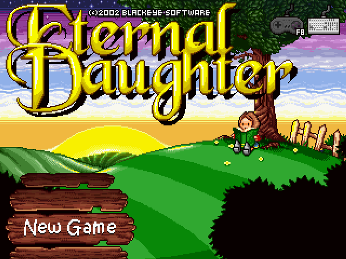 Eternal Daughter is a side-scrolling Action-Adventure platformer made by the duo of Derek Yu and Jon Perry, under the guise of Blackeye Software. Created with Multimedia Fusion.

Eternal Daughter is set in an alternate universe, populated by four races: The forest dwelling Lorians, the technologically advanced and militaristic Dungaga, the enigmatic Shulin in the mountains, and the rugged, loyal Grodol in underground caves. The story follows the epic quest of a young Lorian girl, Mia, as she escapes the enslavement shared by her people at the hands of the Dungaga. In the initial part of the game, it appears that the Dungaga and their militaristic empire are the true villains. However, about one-third of the way into the game, it is revealed that the Dungaga were mere dupes, and the true cause of the evil in the world is the dark God Baphomet, who is using the Dungaga's greed for ore to uncover the Portal where he lies hidden. Mia must then confront his henchmen, endure trials to earn the blessings of the four races' gods, and finally face off against Baphomet in single combat.

Most, but not all, of the beautiful soundtrack (the portion composed by Swedish virtuoso David Saulesco) can be found free for download.