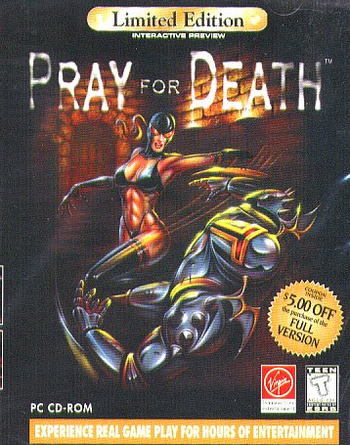 "The game looks pretty good. The rendered backgrounds are sharp and use light sourcing and shading.(...) Add in some dull music and long, boring combos, and it equals a competent but uninspired game."
—Yahoo Games UK & Ireland
Advertisement:

One of the many fighting games that tried to copy Mortal Kombat. Although the influence of Killer Instinct is undeniable.

Pray For Death is a 1996 Fighting Game for DOS PCs, which tried to imitate Killer Instinct but didn't achieve much. While the graphics were great (for its time), the gameplay was uninspired, the sound horrible and the fatalities lame. However, it's worth mentioning that it includes Cthulhu as a character.

This game is still sold on Steam and GOG.com. It can also be played in a browser or downloaded here

Not to be confused with the Ninja movie of the same name starring Sho Kosugi.