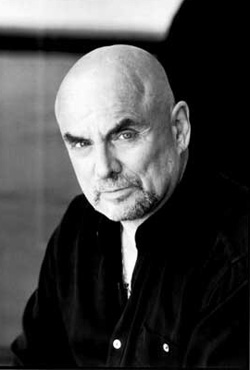 "In a World… There, I said it. Happy?"
— Don LaFontaine, on Phineas and Ferb
Advertisement:

In a World… where action movie trailers are made... one ordinary man, under extraordinary circumstances... will discover the hidden power of his own voice... and change the world.

Even if you don't recognize the name, you undoubtedly know the voice

. Donald Leroy LaFontaine (August 26, 1940 — September 1, 2008) almost singlehandedly created the modern era of movie trailers, with his distinctive voice and style of delivery replacing the text transitions of the 80's. Don was respected throughout the industry for both his talent and personality and you would be hard pressed to find anyone imitating his distinctive delivery as anything but a respectful imitation, or an Affectionate Parody of the guy. Though best known for "In a World…", Don's voice was reportedly heard in hundreds of thousands of TV spots and more than 5,000 times in movies and movie trailers in just about every genre imaginable. He noted that a major advantage was that his voice existed on a pretty unique timbre, meaning a quiet conversational tone could be easily heard despite any noise in the trailer behind it. His favourite movie trailer was for The Elephant Man which he not only voiced but also wrote. He did Opening Narration for Fillmore!, JAG, and Team Knight Rider, and also starred As Himself in the sketch 5 Men and a Limo.

He got his start because he had a job writing the copy for movie trailers, and one day the voice actor man who was supposed to do the trailer failed to show, so LaFontaine was asked if he would do it. Thus, a legend was born.

LaFontaine eventually passed away on September 1, 2008, six days after his 68th birthday, due to complications from a pulmonary embolism.