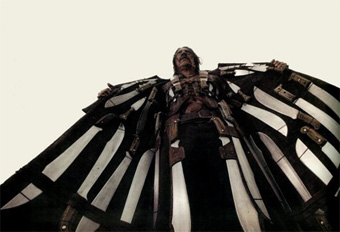 They call him "Machete". I wonder why?
"Guys, it's okay! He just wanted his machete back!"
— Professor Lowe's famous last words, Jason X
Advertisement:

The machete. The perfect weapon. Unlike a chainsaw, it doesn't need a power source, never jams, and you can actually swing it like a sword. Unlike a katana, you don't need to pay hundreds of dollars for a decent one and you don't need years of training to effectively wield it. Unlike a kitchen knife, you can actually use it to lop someone's head off. Unlike a scythe, you can actually kill someone with it. And unlike a gun, you don't have to reload it, you can guarantee that a strike will kill a victim, it won't jam, and you don't have to worry about aiming. All this could be why they've become so popular in pretty much any movie where people get hacked to bits.

The machete's original application, like many similar implements of destruction, was agricultural; they were used to clear undergrowth. In the Caribbean, it was a necessary tool for picking sugarcane, as well as useful for cutting the heads off snakes that were apt to bite cane-pickers. This usefulness and versatility made machetes a common household and farm tool in India, Indonesia, Latin America, the Philippines, Southeast Asia, and Sub-Saharan Africa. This prevalence also meant they were often one of the only weapons available if the farmers were attacked, and their use as weapons eventually lead to the development of many martial arts from these regions (such as Silat and Eskrima) featuring various machete styles as a central part of their armed combat teachings.

James doesn't like heights, and threatens Jeremy with a Machete after he ran into the back of him on Death Road.

James doesn't like heights, and threatens Jeremy with a Machete after he ran into the back of him on Death Road.