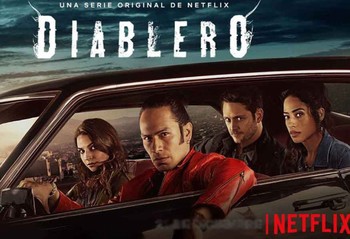 From left to right: Nancy, Elvis, Ventura, Keta.
"We are the Diableros. We are charged with keeping that order."
— Elvis Infante
Advertisement:

Once upon a time, angels and demons opposed each other in perfect balance, maintaining order between good and evil. Disgusted with the humans' depravity, however, the angels left, freeing the demons to prey upon the humans with impunity. With no other way to defend humanity, some humans became demon hunters, called diableros, who hunt and kill demons who attack or attempt to possess humans.

Diablero is a Netflix original Mexican Urban Fantasy series. Set in Mexico City, it follows a trio of diableros — Elvis Infante (Horacio García Rojas), his sister Enriqueta "Keta" Infante (Fátima Molina), and Nancy Gama (Gisselle Kuri) — who agree to help a Catholic priest, Ramiro Ventura (Christopher von Uckermann), track down his illegitimate daughter, Mariana, who has been taken by a demon. When the story starts to smack uncomfortably of a similar incident that happened to Keta's infant son years ago, the four realize that this battle will decide not only the fate of Mariana, but that of all humanity.