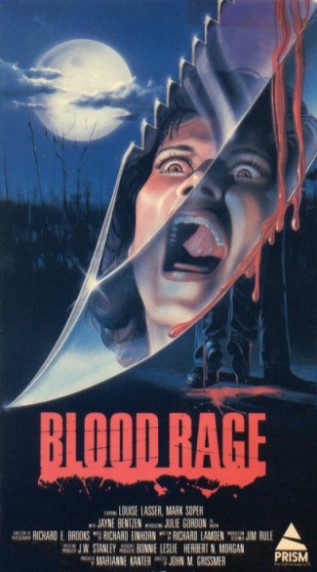 Blood Rage is a 1987 Slasher Movie, which is also known as both Nightmare at Shadow Woods and Complex.

In 1974, while at a Drive-In Theater with his mother Maddy, and his twin brother Todd, a young boy named Terry Simmons brutally murdered a fellow moviegoer, and framed Todd for it. Traumatized by witnessing what his brother had done, Todd fell into a catatonic state, and was placed in a mental institution, while Terry went on to live a normal life with their mother, even getting a girlfriend named Karen. Unfortunately for Terry, a decade after the murder, Todd starts to come out of his shell, and regains the memories of what really happened all those years ago; he subsequently manages to escape the asylum on Thanksgiving. This, coupled with Maddy's intention to marry her boyfriend Brad (who owns the sprawling apartment complex where they live) causes Terry to snap and go on a killing spree.

The film has a bit of a convoluted history. While made in 1983, it was shelved until 1987, when a severely cut version of the film (dubbed Nightmare at Shadow Woods) showed up in a few theaters, while that same year the original uncut version of the film was released on VHS by Prism Entertainment. Some seventeen years later, Nightmare at Shadow Woods was released to DVD by Legacy Entertainment. Arrow Video released the film on Blu-ray in 2015 with both cuts, plus a third version combining all the footage of both cuts.

The film (the Blood Rage version, that is) is also known for being gory as Hell.