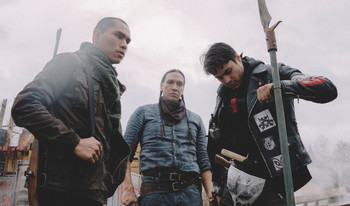 Set in 1981, the movie concerns a zombie outbreak near the Red Lake Reservation, where Traylor (Michael Greyeyes) is the police chief. The Native population discovers they are immune to the virus, and begin fighting back against the zombies and taking in survivors.

The movie premiered at the 2019 Toronto International Film Festival in the Midnight Madness category and was later given a release in Canadian theatres with a limited theatrical release in the United States prior to the film being released on the Shudder streaming service.

Trailers can be seen here

Tropes Associated With Blood Quantum Include: