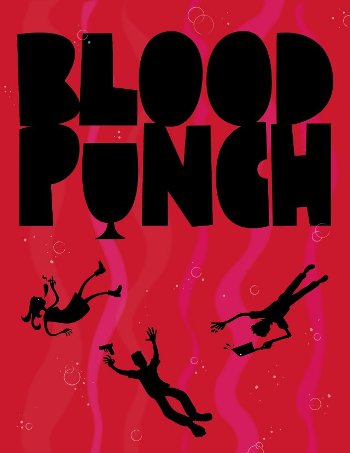 Several former Power Rangers alums worked hard to give you this movie. Just thought we'd point that out.
"Think back on it now, it was easy to see where all this was heading. It’s easy to see all the warning signs. You have to understand that at the time, you couldn’t see any of it. Because at the time all you could see was what we wanted to see. It was her."
— Milton, Opening Narration
Advertisement:

Take two writers from children's television along with a cast of former Power Rangers actors from New Zealand, and the logical conclusion would be to produce a low-budget independent horror film.

Blood Punch tells the tale of a brilliant college-aged chemist named Milton (played by Milo Cawthorne) who ends up in rehab. While in rehab, he meets the beautiful and brash femme fatale Skyler (played by Olivia Tennet), who seduces him into a scheme in which he would cook crystal meth and make lots of money along the way. After breaking him out with the help of her crooked cop (ex-)boyfriend Russell (played by Ari Boyland), they then head to a cabin in the woods to begin their work. Along the way, Milton finds himself in an incredibly bizarre and dangerous love triangle gone horribly wrong. When blood gets spilled, triggering an ancient Native American curse, the trio find themselves stuck replaying the same day over and over again.

The film came about after writer Eddie Guzelian joined the crew of Power Rangers RPM as its Executive Producer. Seeing the talent from the cast, he decided to write a movie with them in mind. Production took place in late 2011 high up in the Southwestern California mountains outside of Los Angeles, but the film did not see the light of day until the 20th annual Austin Film Festival in October 2013, where it took home the Dark Matters Audience Award. Over the next year, Blood Punch enjoyed a successful film festival run, winning an impressive number of audience and jury awards before landing a worldwide distribution deal.

On September 1, 2015, after a limited U.S. theatrical run, Blood Punch was released commercially through out the U.S. and North America, debuting as the #1 horror movie on the iTunes charts. Despite its low-budget horror pedigree and Power Ranger roots, Blood Punch was met with overwhelming critical praise from both traditional media (The Hollywood Reporter, Village Voice, LA Weekly, Indiewire) as well as genre-specific online sites (Aint It Cool News, Dread Central, Bloody-Disgusting) and currently holds a 78% fresh rating on the Rotten Tomatoes website.