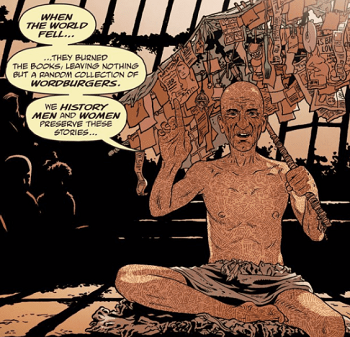 "He's old. He only lives to keep the past."
— Ivor, Solarbabies
Advertisement:

The Wasteland Elder is the de facto leader of their small, rundown community. Maybe it's After the End, it could be a Western frontier town fallen on hard times or even just a tent town for squatters in the middle of a city. Another common setting for the trope is an isolated area where the survivors of a plane crash, shipwreck, or (in a science fiction setting) spaceship crash are left stranded. No one elected them, they never put their name in a sorting hat, nor do they push their leadership on their people. They're simply an old survivor and respected enough that their word carries weight. And since pretty much everyone can theoretically grow old, wise, and respected enough to fill this trope, it is an equal opportunity character.

If the Wasteland Elder is not leading their community, chances are the actual mayor is either corrupt or has been forced to help the Big Bad. Classic roles for the Elder include acting as a first point of contact, quest-giver, and Mr. Exposition for The Hero in the beginning. Later they may rally the Untrusting Community to take up arms and become a Posse or on the other side inspire the protagonist to come out of their Heroic BSoD. With a little luck, their community won't be dying like animals any longer - but of course, the Elder themself runs the risk of Mentor Occupational Hazard. Some settings have the wasteland elder be a member or leader of La Résistance. Once the Big Bad is beat, surviving Wasteland Elders usually rally their constituents to start working to improve their town, thanking The Hero for all they've done and offers them a more permanent home, mostly to set up a But Now I Must Go.

Compare and contrast Wasteland Warlord, a more tyrannical ruler of the town and who is often the villain the Wasteland Elder is helping the heroes fight.

See also After the End, Reasonable Authority Figure, Character Witness. If they have "subjects" and are homeless, they're the King of the Homeless. Not to be confused with Hermit Guru.