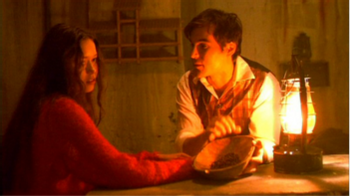 Arriving at a planet with a load of cattle for sale, Mal tells Simon and River to walk into town during the negotiations because "She makes things not be smooth." Simon becomes temporarily separated from River, but is relieved to find her enjoying herself for once, dancing a reel with the townsfolk. At the end of the jig, the two are captured and hauled off by settlers from another town, desiring to shanghai Simon as their doctor.

In the meantime, the negotiations are disturbed by a group of lawmen come to arrest the cattle buyers. A gunfight breaks out in which Book is wounded severely. Unable to find the Tams, Serenity takes off without them to find help for Book. The only advanced medical facility within days of travel is an Alliance vessel; they are at first refused, but Book's ID card suddenly changes the military's mind, and he is rushed into care.

In the meantime, River reveals knowledge about the life of a mute child that she should not have, thus getting her accused of witchcraft and hauled out to be burned at the stake. She adds to this imprudence when the villagers are gathered by very strongly implying that the headman had murdered the previous headman. Simon tries to shame and even fight off the mob, but finally believing there is no hope, he chooses to die with River. Just as he says "light it," Serenity arrives to rescue them.

This episode shows the close relationship between Simon and River. It's also the first big hint dropped about Book's murky past.
Advertisement: