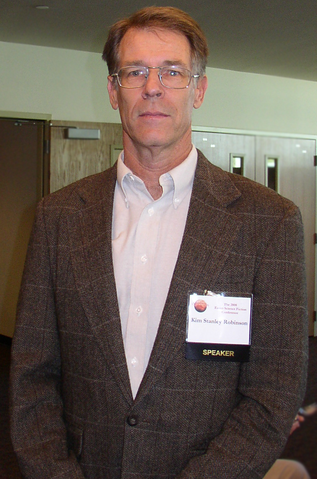 Robinson came as close as you could get to having a PhD in Science Fiction: his doctoral dissertation in English was on the novels of Philip K. Dick.

His first novel, The Wild Shore (published the same year as his dissertation) was personally selected by legendary SF editor Terry Carr as the lead for a new series of noteworthy first novels that Carr was preparing for Ace books. The series, and Robinson, were a big hit, and the novel soon turned into a trilogy, with sequels The Gold Coast and Pacific Edge filling out his "Three Californias" sequence.

It was his Red Mars Trilogy, however, that moved Robinson to the top tier of SF writers. The three books earned nearly a dozen major SF awards internationally between them, including the Hugo, Nebula, Seiun (Japan), and Ignotus (Spain).