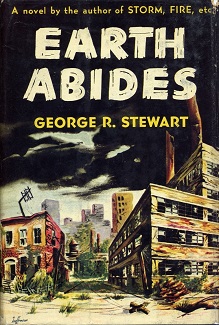 A classic 1949 novel by George R. Stewart, which depicts the new tribal society which slowly arises in (the ruins of) Berkeley, California after most of humanity is wiped out by a viral plague. Features much rumination about ecology and human society. One of the first of the Cosy Catastrophe genre, and a major influence on Stephen King's novel The Stand.