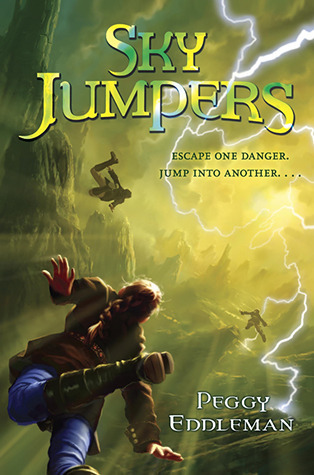 Sky Jumpers is a Post-apocalyptic Children's Book by Peggy Eddleman.

Hope Toriella is a 12-year-old girl living in the town of White Rock, Nebraska, situated in a crater in a USA that's been ravaged by World War III. She's impulsive, a risk-taker, and unfortunately for her, not the best type of inventor in a town where people are encouraged to do just that.

One day in winter however, her town is invaded by bandits who've come to take their antibiotics. This is a problem because, without said antibiotics, much of the town likely won't survive the months to come. However, if they don't hand it over, the bandits will kill everyone there. So, with no other options, and with the town's guard off in the neighbouring town of Browning, the town has to comply and hand over their next batch when it's ready.

Hope, however, is not going to just sit idly by and let these bandits doom her people like this. Ultimately, she decides that maybe, just maybe, her impulsiveness is just what she needs to save the day.

So, with the help of her friends, Brock, Aaren, and Aaren's little sister Brenna, Hope decides to go over the Bomb's Breath around the town to Browning to get the guards back.

The book was published in 2013. The book also has a sequel, Forbidden Flats.