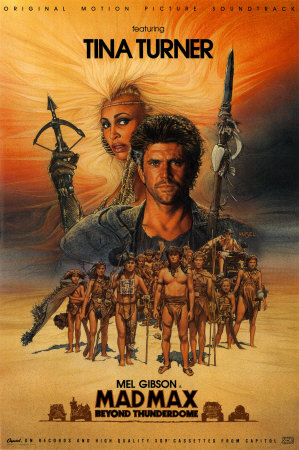 I come from a land down under
Where one man leaves when two enter
We don't need another hero
We don't need to know the way home
All we want is life beyond Thunderdome
— Tina Turner, "We Don't Need Another Hero"
Advertisement:

Many years after the first two films, Max becomes involved in a power struggle over control of the fledgling new society of Bartertown, between its founder Aunty Entity and the duo "MasterBlaster" who control its energy supply. Making a deal with Aunty Entity to recover his stolen vehicle, Max must fight Blaster in The Thunderdome where "two men enter, one man leaves". This eventually leads to Max running into a society of wild children in a hidden valley, who were survivors of a plane crash and believe him to be the pilot they have been waiting for to take them home.

The film is basically an adaptation of Riddley Walker, but with Max Rockatansky as the protagonist.

Come on, what's all this talk about Mad Max? Can't we get beyond Thunderdome? (Well, in 2015 we finally did.)