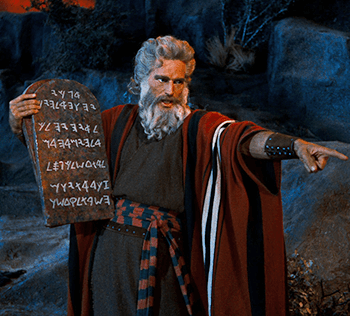 "Those who will not live by the law...shall DIE by the law!"
"The Lord, the Lord Jehovah has given unto you these Fifteen— [drops one of the stone tablets] —Oy. ... Ten! Ten Commandments for all to obey!"
— Moses, History of the World Part I
Advertisement:

The Commandments are a short list of simple rules that must be followed. It's a much simpler system than any rulebook, lawbook or manifesto. The most famous such list of commandments (at least in western culture) is the one known as The Ten Commandments, featured in Real Life Christianity as well as stories about the faith.note It is widely believed that the Ten Commandments are also common to Judaism, but this is a misconception. In Hebrew, those verses are referred to as "the Ten Statements"; they are in fact made up of fourteen commandments, and are not even considered of particular importance. There are also differences

between Christian denominations as to how those fourteen are grouped into ten. However, many other such lists pop up in various media, especially fantasy.

If a work has its own list, include the list on the example. (Unless the list is really long, but if it is then it's unlikely that the example truly belongs in this trope in the first place.)

No examples from Real Life religion or philosophy please. Not on the main page.