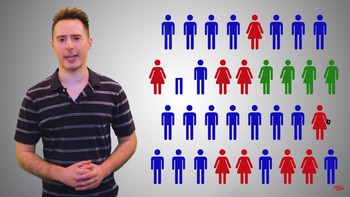 James A. Janisse doing what he does best: countin’ kills.
"Welcome to the Kill Count, where we tally up the victims in all our favorite horror movies!"
— James A. Janisse, the opening to each episode
Advertisement:

The Kill Count is a web video series hosted primarily by James A. Janisse of Dead Meat, though starting in 2022 some videos would be hosted by guest hosts, such as James' wife Chelsea or Dead Meat editor Zoran. The series offers a humorous summary of horror/thriller movies while counting down the kills that appear in the movie.

While showing clips from the films and making snarky jokes, James lists whenever a character dies, timestamps their death in the movie's run time, and lists the cause of death. Even though the series focuses on deaths and gore effects, the host also offers his takes on the films as he tallies the numbers while giving behind-the-scenes facts.

The kill count record for the series is currently held by Zombieland: Double Tap at an estimated 376 deaths.

Now let's get to the tropes!:

"And that's it! TV Tropes was founded in 2004, and has since gone on to ruin the lives of many denizens of the Internet. I'll be back next week to see how many tropes that other wiki has. But until then, I'm James A. Janisse... (nods) this has been The Kill Count."