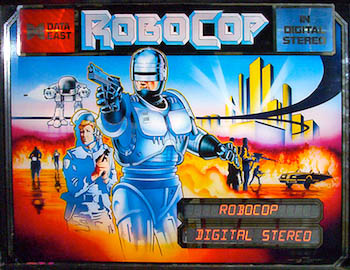 The Future of Cyborg Duck Faces
"Your move, creep!"
Advertisement:

RoboCop is a licensed pinball machine designed by Joe Kaminkow and Ed Cebula, with illustrations by Kevin O'Connor. It was released by Data East Pinball in 1989, just a few months before the premiere of RoboCop 2.

As one would expect, the game is a tie-in to the 1987 smash movie featuring the titular cyborg super-cop. As RoboCop, the player must patrol the streets of Detroit, enforcing his Prime Directives while arresting lawbreakers of all types. Capture Emil Antonowsky, Clarence Boddicker, and Dick Jones, then jump the Entry Ramp to start multiball. Spell ROBOCOP for random rewards and an extra ball, then get some target practice and confront ED-209 for a million-point bonus, all while the game plays memorable quotes from the film.

Among pinball die-hards, RoboCop is considered a mediocre table, with lackluster artwork and a shallow ruleset; it's possible to rack up a high score at the game simply by repeatedly shooting the Entry Ramp jump and left spinner orbit. None of this matters one iota to the game's fans, who find it fast and fun, a back-to-basics game with great music and a memorable light show that provides a simple way to revisit the iconic movie.