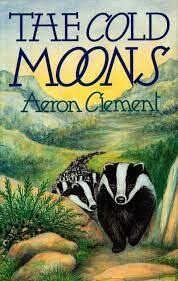 The Cold Moons is a 1987 novel by Aeron Clement about somewhat anthropomorphic badgers in the British wilderness.

One early spring morning, a duo of badgers bask in the idealistic splendor of their glades. After eleven years living together in Yellow Copse, Bamber and his mate Dainty have just had what is likely their last litter of nestlings. Their peaceful existence is suddenly ruined when humans arrive and spread poison throughout the area. With badgers dropping dead within moments, Bamber attempts to flee with his family. His mate and cubs don't make it, but Bamber does. With that, he flees for the unknown in an attempt to save as many badgers as he can.

After Bamber delivers his message, it switches to the badgers of the Cilgwyn forest, a large and advanced community of several hundred badgers, as they try to escape doom.

The book is based on actual events that occurred in 1970s and 1980s Great Britain: There was an outbreak of tuberculosis amongst cows (and to a lesser extent, other mammals including humans). Badgers were considered the cause, though there was little-to-no evidence that they were. This led to a mass genocide of badgers that pushed them to the edge of extinction in Great Britain.

The Cold Moons provides examples of: