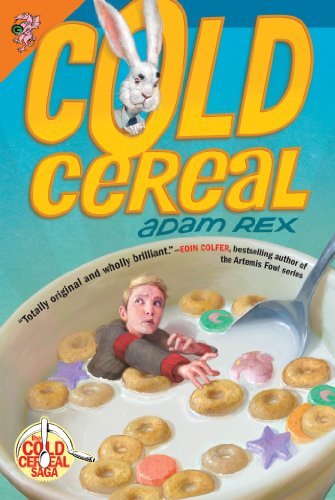 What happens when you mix a bunch of kids, a bigfoot, a leprechaun, a pooka, a unicat, a fire-breathing bird, a pixie prince, a tiny Queen of England, a magical version of Britain, two goblins, a ghost, a movie star, a time-traveling Merlin with a robotic owl, a giant pink dragon, a secret cult, and an evil cereal company with plans to take over the world? You get Cold Cereal by Adam Rex, author of The True Meaning of Smekday and the Frankenstein Makes A Sandwich series. In this book, kids Scott, Emily, Erno, and Polly, movie star John Doe, sasquatch Biggs, leprechaun Mick, pooka Harvey, ghost Haskoll, time-traveller Merle Lynn, and a whole lot more go up against the aforementioned evil cereal company. Hilarity Ensues.