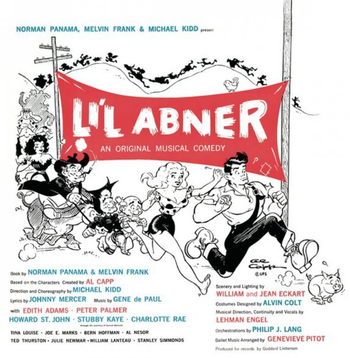 Li'l Abner is a 1956 Broadway musical featuring characters from Al Capp's comic strip of the same name, with a book by Norman Panama and Melvin Frank and songs by Johnny Mercer and Gene de Paul.

The Dogpatchers are enjoying their Small Town Boredom when Senator Jack S. Phogbound comes bearing a message from Washington: Dogpatch, having been determined to be the most unnecessary town in the country, has been selected to become the next atomic test site. Dogpatch's annual Sadie Hawkins Day chase is in jeopardy until the town can prove it has a reason for existing. Mammy Yokum suggests the yokumberry tree, which only grows in Dogpatch and whose berries are the source of her son Abner's strength, and Li'l Abner demonstrates this to government approval. This attracts the attention of Corrupt Corporate Executive General Bullmoose, who sends his floozy Appassionata Von Climax to contend with Daisy Mae in capturing Li'l Abner on Sadie Hawkins Day.

Panama and Frank produced and directed a film version released in 1959 by Paramount Pictures. The film featured many actors from the original production, including Peter Palmer as Abner, Stubby Kaye as Marryin' Sam, Howard St. John as General Bullmoose, and Julie Newmar as Stupefyin' Jones.

The musical includes the following tropes: