Film / The Light That Failed 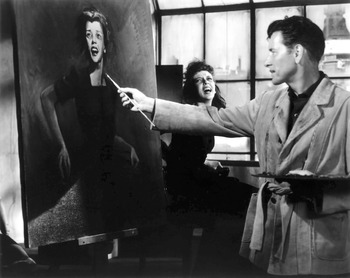 She's just as crazy as her portrait!
Advertisement:

The Light that Failed is a 1939 melodrama film directed by William A. Wellman, starring Ronald Colman, Walter Huston, Muriel Angelus, and Ida Lupino.

Adapted from the Rudyard Kipling novel of the same name, the story is about English artist Dick Hedler (Colman), who receives a wound to the head while saving the life of a friend during The River War in Sudan. After the war, Hedler knocks about in foreign lands practicing his craft when Torpenhow (Huston), the friend he saved during the war, invites him back to England because his paintings have become a sensation. Back in London, Hedler meets with Maisie (Angelus), an old childhood sweetheart, who is a struggling artist and painfully rejects Hedler’s offer of marriage. Saddened but still determined to continue his success, Hedler turns conceited and begins neglecting his artistic vision.

Tragedy strikes when he's diagnosed with decaying optical nerves as a result of his war injury. Facing unavoidable permanent blindness and determined to make his masterpiece, he finds Bessie (Lupino), a floozy Cockney girl, and paints her portrait.

Not to be confused with the M*A*S*H episode of the same name.