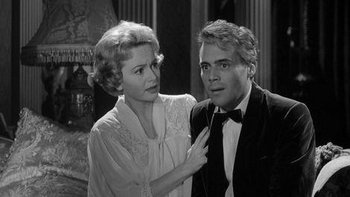 Libel is a 1959 drama film directed by Anthony Asquith, adapted from Edward Wooll's 1934 play of the same name.

Sir Mark Loddon (Dirk Bogarde) is an English baronet, living a contented life in the country with his American wife Margaret (Olivia de Havilland). One day he's visited at his country estate by a Canadian officer and World War II veteran, Jeffrey Buckingham (Paul Messie). Buckingham served time with Loddon in the same German POW camp before they made their escape in 1945, along with a third officer, Frank Wellney. Buckingham has a shocking allegation: the Mark Loddon living the life of an English country gent actually is Frank Wellney, who murdered the real Mark Loddon during the escape and then took his identity. When Buckingham goes public with his accusations, Loddon sues for libel. But there's one problem: Loddon has PTSD from the war, and can't remember very well...