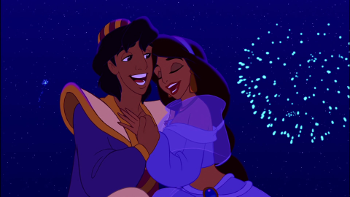 "A whole new world!"/"A whole new life!"/"For you and me..."
"Once in every show
There comes a song like this
It starts off soft and low
And ends up with a kiss.
Oh, where is the song that goes like this?"
— Spamalot, "The Song That Goes Like This"
Advertisement:

In musicals, the leads often sing a love duet towards the end of the second act. It's the moment right before they end up Happily Ever After or part in bittersweet fashion. It may be an original song or a reprise. More common in older musicals, this song is usually sweet, sentimental, and often includes a kiss at the end.

Most of the time, you can identify one of these just from the playbill, by the fact that the leads sing a duet towards the end. May or may not be preceded by an Eleven O'Clock Number.

The film ends with Jack and Sally admitting their feelings to one another.

The film ends with Jack and Sally admitting their feelings to one another.