All Animals Are Domesticated 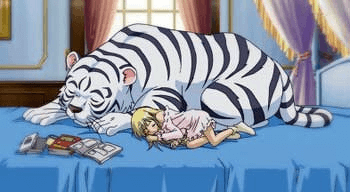 In fiction, wild animals rarely act the way that they do in real life. Those hilarious Plucky Comic Relief chimpanzees and their hilarious antics? Never once do they get violent, no matter what (they may get mad for the hero's benefit, though). When animals do get mad, they're usually easily calmed down if just given whatever MacGuffin is necessary. Is a bear rampaging through town? Just give it some honey and everything will be OK. Being a Friend to All Living Things can help, but surprisingly often it seems like nearly anyone can calm down a wild animal.

Part of the cause of this is simply that animal sidekicks are really adorable (and loyal wild animal companions are cool in themselves), but most of the more interesting ones are not of domesticated species, and the only rational way for the hero to get one is from the wild. Taming an adult animal is far more trouble than it's worth. Even taming a baby one never does much for softening its wild instincts. (Incidentally, no reptiles are truly domesticated; they adjust to captivity well given the right temperatures and food, but that's pretty much it.)

Another strong factor is the huge number of YouTube videos available showing "wild" foxes (red, white, and yellow), other canines (coyotes, dingos, hybrids of all types), and smaller cats (up to lynx size, though you do find the occasional cougar) living in apparent domestic tranquility. There are also an increasingly large number of wildlife sanctuaries where you can go along and 'pet a wolf'. Again, most people tend to miss that these animals only behave like pets around people they know, usually have their own 'play/sleep room' (that they trash), and are extremely difficult/expensive to look after. The domestication is usually only partial and not hereditary, and you're only seeing the successful cases. That ambassador wolf who shoves his head into your lap and rolls over begging for you to pet his tummy? Almost certainly 50% of the animals at such places would simply run away if given the chance, and 90% of the rest will eventually bite you. The keepers picked this one for a reason.

Unfortunately, there are a depressing number of people who think this is Truth in Television and are apparently under the impression that nature is just a bigger version of Disneyland. This usually does not end well...

Note that "domesticated" means "genetically altered to meet human needs", not "tamed". Until very recently, this meant intentional or unintentional selective breeding. A feral housecat is domesticated, but a trained bear is not. Also, there are some animal species that can be somewhat successfully tamed or trained if not entirely domesticated, usually due to a combination of small size (meaning even if they do act out they generally aren't threatening to teen or adult human life), intelligence (meaning training can be successful), and/or partial breeding for those traits and friendliness to humans. Some good examples would be most small rodents (field or house mice, also including wild rats/prairie dogs/gophers/tree squirrels if raised from birth by humans and trained, though their natural instincts to dig and hoard need to be accounted for), skunks (if deodorized + spayed/neutered + vaccinated against rabies and having been raised with humans from birth), and some small monkeys (in their case, if raised properly alongside humans, which means no fear-based training, raising/training much as one would a human baby/toddler), with the one larger example being some wolf-hybrid dogs (those that have docility and intelligence bred as traits). Of course, most of these, with the exception of small rodents like mice, require specialized training for their trainers/owners as well in how to train and care for them, so you can't just go and pet a wild skunk or let your female dog mate with a wolf at random or bring that monkey stealing oranges from the fruit stand into your home, either.

All in all the sad truth is that only a very small minority of the millions of species in the world have the combination of traits necessary for true domestication, and only a few of those actually have been fully domesticated.

Compare All Animals Are Dogs, which is about non-canine animals exhibiting doggy mannerisms. Also see Domesticated Dinosaurs for what happens when this trope is combined with Everything's Better with Dinosaurs. Contrast Everything Trying to Kill You.