Literature / The Coldest Girl in Coldtown 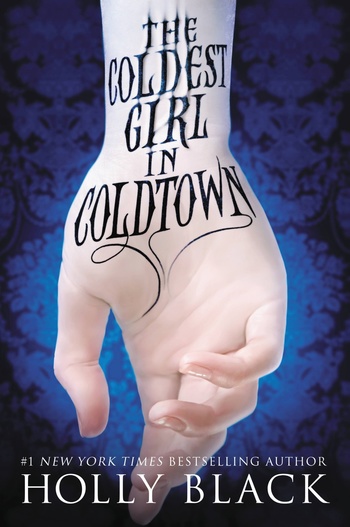 "We labor under so many illusions about ourselves until we're stripped bare. Being infected, being a vampire, it's always you. Maybe it's more you than ever before. You, distilled. You, boiled down like a sauce. But it's you as you always were, deep down inside.”
Advertisement:

The Coldest Girl in Coldtown is a 2013 young adult supernatural romance novel by Holly Black. It takes place in a world where the existence of vampires is known by the general populace. Vampires are required to live in walled-in cities known as Coldtowns so as not to endanger human lives.

Tana Bach wakes one morning after a party to find a massacre. There's no question that it was vampires, and she discovers two survivors: her ex-boyfriend Aidan, who has been infected, and Gavriel, an imprisoned vampire. After a narrow escape from the crime scene, Tana is determined to save the three of them by taking them to the nearest Coldtown.