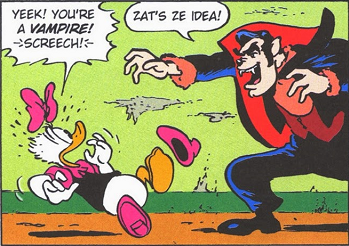 William: He's a vampire!
Otto: I object most stronkly. It iss such an easy assumption to believe that everyvun with an Überwald accent is a vampire, is it not? There are many thousands of people from Überwald who are not vampires!
William: All right, I'm sorry, but—
Otto: I am a vampire, as it happens. But if I had said 'Hello my cheeky cock sparrow mate old boy by crikey,' what vould you have said zen, eh?
William: We'd have been completely taken in.
— Terry Pratchett, The Truth
Advertisement:

In other words, whenever vampires speak, they will inevitably have an Eastern European or Slavic accent. In the novel Dracula the character of Count Dracula is said to be a Szekely, a Hungarian-speaking ethnic group still found in Romania. (This is one of the many characteristics that makes Stoker's character Dracula different from the historical Vlad the Impaler — Tepes — who was ethnically Vlach and spoke Romanian as his native language). Bela Lugosi, who played the best-known screen Dracula in the 1931 film, was also a native Hungarian speaker. Also, due to the prominence of Jewish actors in Hollywood, it can also sound suspiciously like Yiddish — which, although a Germanic language, has been significantly influenced by Slavic languages, especially in terms of pronunciation/accent (at least for the Eastern Yiddish dialect group with Galitsianer, i.e Ukrainian Yiddish, and Litvak, i.e. Lithuanian Yiddish).

A large number of vampires in fiction have adopted the same affectations in their speech. As more modern portrayals have been introduced, this has become less common, but it is still frequently used in comedic portrayals.

All of vhich ics to szay zat zare are an auful lot of vampires avound who vont to "sohk yu blaohd". Also they tend to say "BLEH!" or "BLAH!" a lot; often two or three utterances at a time.

Note that in the original novel, Count Dracula is said to speak Surprisingly Good English. (In fact, when his guest comments on it, he explains that his pride would never allow him to settle for merely being another foreigner with a funny accent once he visits Britain.)

Additionally, Bela Lugosi did not actually make his W's sound like V's. Check out the real deal here

note He does say "it would be vell for you to return" at the beginning, but near the end he pronounces "wolfbane" with a w.. Even Martin Landau got this one wrong — compare the original "atomic supermen" speech in ''Bride of the Monster''

with Landau's version in Ed Wood.

See also Fang Thpeak and Sssssnake Talk. Compare The Coconut Effect. Related to Fake Russian. This trope has nothing to do with the Vord.