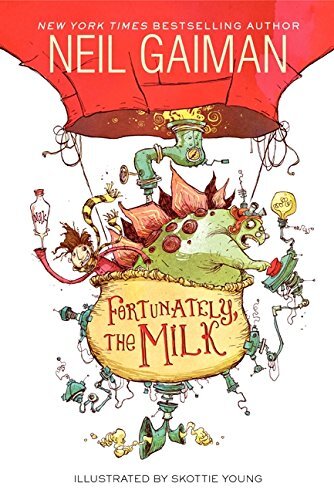 "I bought the milk," said my father. "I walked out of the corner shop, and heard a noise like this: T h u m m t h u m m. I looked up and saw a huge silver disc hovering in the air above Marshall Road."

"Hullo, I said to myself. That's not something you see every day. And then something odd happened."
Advertisement:

Fortunately, the Milk is a 2013 children's book by author Neil Gaiman. Two children are waiting at home for their Father to return home with the milk so that they can have their morning breakfast, while their Mother is away at a conference. After an exceptionally long absence, their Father returns with the milk, and a rather odd story about his misadventures in retrieving it. He begins the story with the above quote, and then Hilarity Ensues...

It is illustrated by Skottie Young in the US and Chris Riddell in the UK.

Fortunately, the Milk contains examples of: