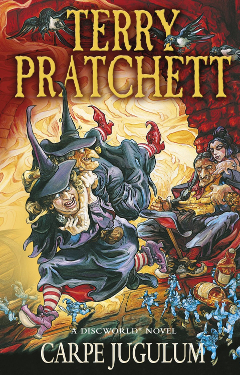 Mightily Oats has not picked a good time to be a priest. He thought he'd come to the mountain kingdom of Lancre for a simple little religious ceremony. Now he's caught up in a war between vampires and witches, and he's not sure there is a right side. There're the witches – young Agnes, who is really in two minds about everything, Magrat, who is trying to combine witchcraft and nappies, Nanny Ogg, who is far too knowing... and Granny Weatherwax, who is big trouble. And the vampires are intelligent – not easily got rid of with a garlic enema or by going to the window, grasping the curtains and saying, "I don't know about you, but isn't it a bit stuffy in here?" They've got style and fancy waistcoats. They're out of the casket and want a bite of the future. Mightily Oats knows he has a prayer, but wishes he had an axe.
Advertisement:

The 23rd Discworld novel and the sixth in the Witches Theme.

King Verence and Queen Magrat of Lancre have had their first child, a daughter, and have invited all the nearby rulers to her naming ceremony. Unfortunately, this includes the de Magpyr family of vampires from neighboring Überwald, and now that they've been invited to Lancre, they have no intention of leaving. It's up to the witches, along with a drippy Omnian priest called Mightily Oats, to defeat them and save the kingdom from its new vampire overlords.