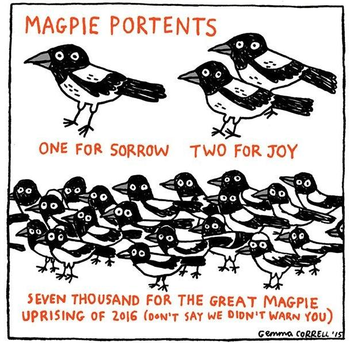 Used with permission.
"One for sorrow, two for joy,
Three for a girl, and four for a boy,
Five for silver, six for gold,
Seven for a secret never to be told."
— Nursery Rhyme (one of many variations, this one popularised as the theme song to Magpie* a British children's TV series, 1968-1980)
Advertisement:

There are a number of superstitions surrounding magpies, black and white birds that feature in a lot of stories (especially in the British Isles). These include, as the rhyme indicates, that they are omens (for good or ill) of the future and that the bad luck of a lone magpie must be warded off with a ritual of some sort. Some of the "warding off bad luck" superstitions are quick and only require a simple salute, while others are a bit more eccentric, involving pinching, spitting or saying certain phrases. The idea that magpies are omens of the future has led to a flock of them being called a "tidings of magpies".

Magpies are members of the corvid family and relatives of ravens and crows. The rhyme—in all its manifold variations—is also used on occasion for crows. (Australian Magpies, on the other hand, are unrelated songbirds that just happen to bear a resemblance.)

Note: This trope is not about magpies per se, but about the association of certain numbers of magpies with good or bad luck, and the rituals for warding the bad luck off.

Alternative Title(s): One For Sorrow Two For Joy