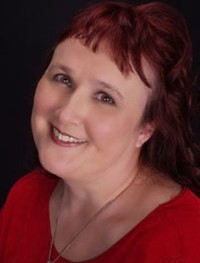 Mercedes Ritchie Lackey (born June 24, 1950) is a prolific author of fantasy and Urban Fantasy literature, as well as a lyricist, songwriter, and filk singer. She started out as a fanfic writer.

She sometimes writes with other authors, including her husband, Larry Dixon, who also illustrates her work.

When not creating, Lackey works as a wild bird rehabilitator in Oklahoma, and owns several parrots. Falconry and other avian pursuits, as well as equestrianism, are therefore common themes in her work.

She was also an avid player of City of Heroes, devoting a lot of time and effort to saving the game from cancellation.

Works by Mercedes Lackey with their own pages:

Other works by Mercedes Lackey contain examples of: