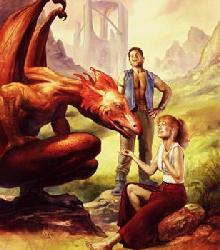 The Halfblood Chronicles, sometimes called the Elvenbane Trilogy, is a series of Fantasy novels by Mercedes Lackey and Andre Norton. They take place on a world in which humans are slaves to the cruel and sadistic elven race, and a race of shapeshifting dragons watch warily from the remote deserts.

The heroine of the first and second books is Shana (no relation to a certain Flame Haze), a girl born from a human concubine and an elven lord, a combination that is considered extremely dangerous since such a cross can access both human and elven magics in equal measure. Her mother escaped the death sentence such a pregnancy carries by escaping into the desert, but ultimately died there giving birth to her. Shana was adopted by Alara, a dragon shaman.

The dragons enjoy playing cruel pranks on the elves utilizing their shapeshifting, and one of them is the prophecy of the Elvenbane, a half-elf child who will bring the downfall of the elven race. When Shana is set adrift in the world, it seems that this prophecy might have more weight than the dragons ever believed, if only because the elves are determined to make it self-fulfilling.

Not to be confused with that kind of half-blood. Nor that one.