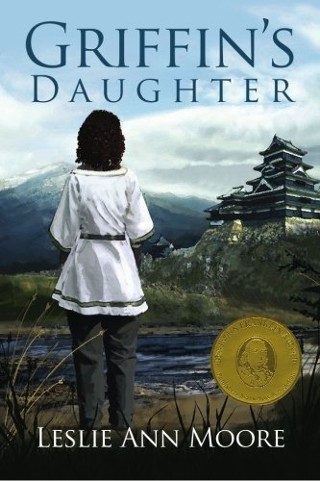 Griffin’s Daughter is a trilogy of fantasy novels by Leslie Ann Moore. The central character is Jelena, a half-elf, niece to a human baron (by way of his sister, who died in childbirth). After Jelena’s uncle agrees to hand her over to another noble as a concubine (an arrangement closer to slavery than an arranged marriage), she runs off to find her father’s people in Alasiri, the elven lands. Accompanying her is her cousin, Magnes; the only member of her mother’s family - and the only human, other than her foster mother, Claudia - who treated her like a person (and who is running from his own personal turmoil).

Once into Alasiri she meets Ashinji, son of the local elf lord. Together, they seek to find out the truth of Jelena’s elf heritage, along with the secret of the strange power growing within her. In the meantime, they must also deal with the possible re-emergence of the elves’ ancient enemy, The Nameless One, and a looming war with the expansionist human kingdom of Soldara.

The second novel, Griffin’s Shadow, deals with revelations about the nature of the power Jelena possesses (but can’t yet control), her true heritage and her and Ashinji’s growing attraction. Along with dealing with both the malevolent presence the Nameless One and the malevolent attentions of Ashinji’s sadistic older brother, Sadaiyo.

The third and final novel, Griffin’s Destiny, is more about Ashinji, as he fights to return to his homeland after the events of ‘’Shadow’’, in time to help with both the imminent war with the humans and the final plan to deal with the Nameless One - a plan Jelena may not survive.