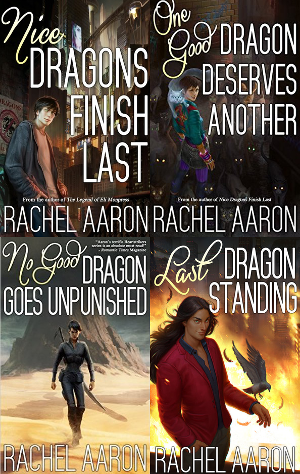 Clockwise from left: Julius, Marci, Bob, and Chelsie.
"You are the worst excuse for a dragon I've ever seen."
— Bethesda the Heartstriker, regarding Julius the Nice Dragon
Advertisement:

The Heartstrikers series is a fantasy novel series by Rachel Aaron/Bach. The series takes place sixty years after an unexplained phenomenon that causes magic to return, awaking several spirits and other magical beings who had gone into hibernation, and causing societal disruption on a global level. It also awakened the latent magical potential of a portion of the human population. The story mostly takes place in the DFZ (the Detroit Free Zone), ruled by Algonquin, the Lady of the Lakes.

The series follows the adventures of Julius Heartstriker, a dragon sealed in human form, and Deuteragonist Marci Novalli, a human mage down on her luck with secrets of her own.