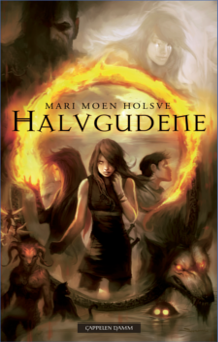 "‘I am not of this world,’ their father said seriously. ‘And neither are you.’"
Advertisement:

Halvgudene (lit. "The Demigods") is a Norwegian Young Adult fantasy series written by Mari Moen Holsve. Its heroes are the triplets Dina, Balder and Thea, three ordinary teenagers from Oslo who one day find out that they are from the mysterious island kingdom Tiladnen, and that their mother is a god from this kingdom. Which makes the triplets Demigods.

Dina, Balder and Thea—or Dimyne, Briskir and Trigg, as they are actually called—go back to Tiladnen, where great danger awaits them: A powerful group calling themselves the alliance wants to gain control over Tiladnen and wipe out all intelligent races but the humans.

While the alliance attempts to get hold of the demigods, the demigods ally themselves with the resistance organization the guild, and decide to join the battle against the alliance.

So far only translated into Icelandic. Completed with 3 books.