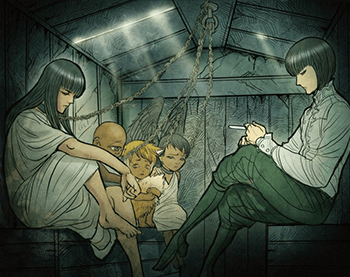 Freedom is their sole desire.
Advertisement:

In both fiction and Real Life, prisoners, slaves, and other captives are often made to go without shoes and other footwear. This can be done for practical or psychological reasons, or some combination of the two. Since wearing shoes tends to be regarded as the norm, the captives' bare feet can also serve as a visual indicator of their lack of freedom both in-universe and in the real world, particularly if no other clothing changes are involved.

Normally an Invoked Trope where the character is deliberately deprived of their shoes by their captors. Alternatively, the character may have ended up without shoes while attempting to flee from or fight off their captors or may have been somewhere where shoes are optional or forbidden when they got captured; in either scenario, the captors have little or no incentive to provide replacement footwear given the factors mentioned in the introduction. The trope does not apply to characters who are routinely barefoot for one reason or another before being abducted, imprisoned or enslaved.

On the other hand, being forced to go barefoot in captivity may change a character into someone who Does Not Like Shoes, even after escaping or being freed.

May overlap with Go-Go Enslavement or Barefoot Poverty. A sister trope to Shirtless Captives (though the captive could end up both shirtless and barefoot).