Literature / The Ballad of Songbirds and Snakes 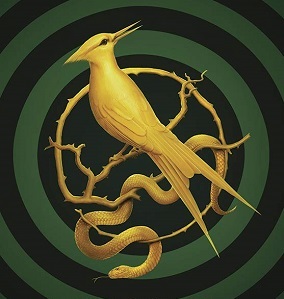 The Ballad of Songbirds and Snakes is a prequel to The Hunger Games trilogy by Suzanne Collins. It takes place 64 years before the first book and focuses on the 10th Hunger Games through the eyes of a teenage Coriolanus Snow, exploring the combination of nature and nurture that led to him becoming the villain of the original trilogy and the evolution of the Hunger Games within the story's universe.
Advertisement:

The book was released on May 19, 2020. It is the first book in the series in nearly a decade; before its reveal, many fans speculated that Collins was done with the series after Mockingjay (she did co-write the first film adaptation, and provide some creative input for the sequels).

A film adaptation was announced by Lionsgate shortly after the book was first unveiled. It is currently slated to be released on November 17, 2023.

Character tropes for this book and the original trilogy of books can be found here.

Note: The title event of this book series is a fight to the death. As such, Death Tropes and death-related spoilers are plentiful. Proceed with caution.
Advertisement: