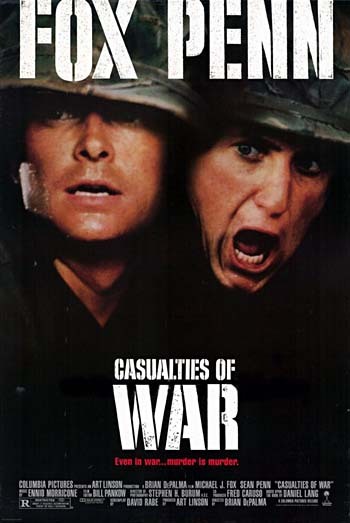 Casualties of War is a 1989 Vietnam War film directed by Brian De Palma and starring Michael J. Fox, Sean Penn, John C. Reilly, John Leguizamo, Don Harvey and Thuy Thu Le (in her only role). It was based on the actual incident on Hill 192.

In 1966 in Vietnam, a squad of five American soldiers, lead by Sgt. Tony Meserve (Sean Penn), kidnap a young Vietnamese woman named Oanh (Thuy Thu Le) from her village and take her on a patrol, making her their sex slave. Of the five men, only one - Pvt. Max Eriksson (Michael J. Fox) - refuses to take part in Oanh's rape and torture, and is determined to bring his fellow soldiers to justice, no matter what the cost.

Ennio Morricone composed the score. It's also notable for being the film debut of John C. Reilly, and for featuring John Leguizamo in a very early role (his second film, and his first major role).

In 2006, an Extended Cut was released, including two scenes near the end featuring Eriksson in court.