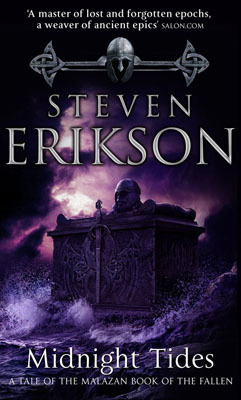 "Of all the gifts Father Shadow has given his children, this one talent stands tallest. Look away to see. Trust in it, and you will be led to Shadow. Where all truths hide.
Look away to see.
Now, look away."
Advertisement:

Midnight Tides is the fifth book of ten in Malazan Book of the Fallen, and the first in the Letherii arc. It was released in 2004, and is preceded by House of Chains. Events are ostensibly narrated by Trull Sengar, a character from the last book — and for its use of And Now for Someone Completely Different, as it introduces the last of the three major arcs. Despite this, it does not employ significant use of Lost in Medias Res — one of the hallmarks of the series — as it largely follows a more traditional storytelling structure than usual, and, as such, is a somewhat different read from the rest of the series.

Several years prior to Gardens of the Moon, the Tiste Edur have united under Hannan Mosag, their first high king in memory. Tensions are running high in the region, however, as the Letherii Empire to the south is becoming increasingly aggressive with its diplomacy with the approach of a sacred event known as the Seventh Closure. These tensions are only exacerbated when Trull Sengar arrives with the news that Letherii poachers have gone after the seals vital to the Edur populations in the area. Before a major incident can be made of this, though, Hannan Mosag announces he has had a dream of a gift from a god buried in the ice far to the north. In the dream, the Sengar brothers were shown to be part of the group to retrieve it, and so Fear, Trull, Binadas, Rhulad and their allies set out to find it.

To the south, in the Letherii capital of Letheras, the impoverished Tehol Beddict — middle brother of the Beddicts — wakes up on his roof for another day of doing nothing, accidentally exposing himself in public and bickering with his manservant, Bugg. Though once the wealthiest man in Letheras, his possessions now number only a blanket, a bed and some cooking pots, and he does not care much about changing this — at least not on the surface. When a trio of businesswomen approach him with an offer, however, he realises that the time might be right to set certain plans into motion.

In the imperial palace of Letheras, Brys Beddict — youngest of the Beddict brothers — has proven himself as the foremost swordsman in the Empire, and has thus earned the rank of Royal Champion, the King's closest bodyguard. Brys is an idealistic young man who only wishes to do his duty as a soldier of the Empire, but the court intrigues of Lether leave little room for a neutral party in their midst, and with the Seventh Closure approaching, events rapidly spiral out of control.

The undead burglar known as Shurq Elalle finds herself suddenly motivated to live again when Tehol offers her a deal; an undead girl named Kettle tries to warn people that the Azath House of Letheras is dying; and in the Sengar household, Udinaas, a slave of the Tiste Edur and a former Indebted of the capitalistic Letherii Empire, finds himself at the center of attention after a divination by the seer Feather Witch draws unwanted attention.

Followed by The Bonehunters.