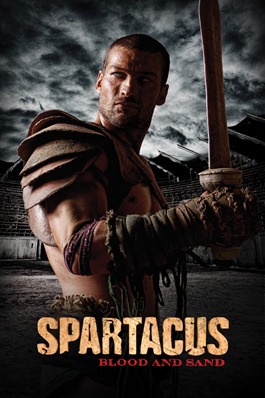 And as fanservice goes, this is easily the tamest example.
Batiatus: What would you do to hold your wife again? To feel the warmth of her skin, to taste her lips? Would you kill?
Spartacus: Whoever stood between us.
Batiatus: How many men? A hundred, a thousand?
Spartacus: I would kill them all.
Batiatus: Then do it in the arena. Fight for me, and the honor of my forefathers. Prove yourself, climb to the pinnacle, gain your freedom, and that of the woman you've lost.
Advertisement:

Spartacus is an extremely graphic, bloody and explicit television drama series created by Sam Raimi, Rob Tapert and Steven DeKnight. It aired for four seasons on Starz from 2010 to 2014, with each season sporting a different subtitle.

The series tells the story of the historical gladiator-turned-rebel leader Spartacus, but drenched in an over-the-top aesthetic lifted directly from 300. Blood, sex and intrigue abound. Andy Whitfield stars in the first season, Spartacus: Blood and Sand as the eponymous Thracian.

After the first season, a half-length prequel season was produced called Spartacus: Gods of the Arena due to Whitfield's cancer diagnosis. Ultimately, Whitfield was replaced by Liam McIntyre for the third and fourth seasons, Spartacus: Vengeance and Spartacus: War of the Damned.

Has a recap page, under construction. Be advised that the folders below may contain unmarked spoilers from previous seasons.

A Tabletop Game called Spartacus: A Game of Blood & Treachery was released in 2012 which has the players taking on the role of Dominus who raise gladiators and scheme for the glory of their house.

Blood and Sand provides examples of:

Spartacus: Gods of the Arena

Gods of the Arena provides examples of:

Spartacus: War of the Damned