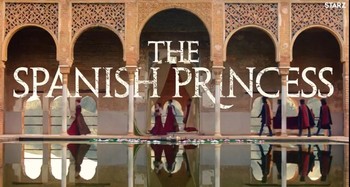 The Spanish Princess is a Starz historical drama series which centers around Catherine of Aragon's time in England during the latter reign of Henry VII. It premiered on May 5th, 2019. The remaining eight episodes were broadcast in 2020.

It is a sequel to The White Princess and by extension The White Queen.

The Spanish Princess provides examples of: