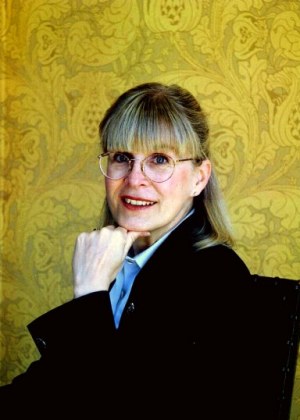 Katherine Kurtz is an American author of historical fantasy books. She was born in Coral Gables, Florida, USA during a hurricane. She won a four-year science scholarship to the University of Miami, where she graduated with a B.S. in Chemistry. Kurtz went on to do a year of medical school also at the University of Miami before changing her focus to the humanities. While completing her MA in medieval English history at UCLA and writing instructional materials for the Los Angeles Police Department, she wrote her second and third novels.

She is perhaps most famous for her Deryni works, which are epic historical fantasies with aspects of alternate history. The map and the cultures of the Eleven Kingdoms are analogous to medieval Europe. The broad conflicts are political and religious as well as magical, with serious considerations of ethics and discrimination. Deryni magic has psychic and empathic aspects, and it seems to function as an extension of the bio-electric field generated by the brain; in terms of storytelling, it adds a rich layer to complex treatments of church-state relations, religious faith, interpersonal relationships, crises of conscience, and the strengths and drawbacks of feudal primogeniture. The covers of her Deryni books include praise such as this from Anne McCaffrey: "An incredible historical tapestry of a world that never was and of immensely vital people who ought to be."

According to her official biography, Kurtz developed another sub-genre she calls “crypto-history,” in which the “history behind the history” intertwines with the “official” histories of such diverse periods as the Battle of Britain (Lammas Night, one of her favorites), the American War for Independence (Two Crowns for America), contemporary Scotland (The Adept Series, with co-author Deborah Turner Harris), and the Knights Templar (two more novels with DTH, plus three anthologies of short stories about the Templars).

The Other Wiki notes

"She also was an early member of the Society for Creative Anachronism; in her persona of Bevan Fraser of Stirling she achieved the rank of Countess, ruling the Kingdom of the West as Queen Consort for one reign in the 1970s." After living in an Irish castle for several years, she and her family have resettled in Virginia. She regularly interacts with fans via Internet Relay Chat. Rhemuth Castle

Works by Katherine Kurtz with their own trope pages include:

Other works by Katherine Kurtz provide examples of: