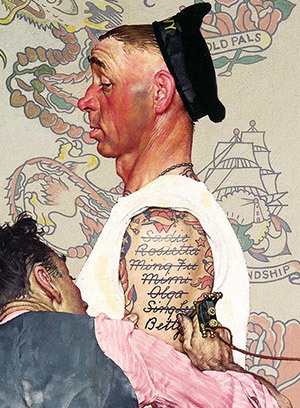 What is he gonna do when he runs out of room?
Sheldon: Why do you have the Chinese character for "soup" tattooed on your right buttock?
Penny: It's not "soup", it's "courage".
Sheldon: No, it isn't. But I suppose it does take courage to demonstrate that kind of commitment to soup.
— The Big Bang Theory, "The Adhesive Duck Deficiency"
Advertisement:

A comedy trope where a character has an embarrassing tattoo. It might be shoddily done, misspelled, or show the name of a former romantic partner. It might be written in a language the wearer doesn't understand (or even read) and thus not mean what they think it does. It might be part of a trend that has been Condemned by History. It might represent a gang or hate group, or otherwise not reflect the wearer's current beliefs or lifestyle. It might be a design or symbol from a culture the wearer has little or no relevant connection to. It might be warped due to age, weight changes, pregnancy, or infection. It may have been the work of an amateur artist. It might be the location of the tattoo that is embarrassing (e.g.: on the buttocks or near the genitals). It might also be the result of teenage whim; even if the person was legally an adult at the time, what looks cool at 19 can easily become embarrassing by 30. Bonus points, or perhaps a Face Palm (depending on the perspective), if Alcohol-Induced Idiocy is a factor, regardless of whether it's the one doing or getting the tattoo.

A Tattooed Crook may face this situation after going straight. This variation is far more likely to be Played for Drama, especially if the tattoos are symbols associated with gang violence or racism, such as a swastika.

When Bronconius discovers that Bob isn't a real equesticle, he plans on humiliating him by giving him an embarrassing tattoo on his back.

When Bronconius discovers that Bob isn't a real equesticle, he plans on humiliating him by giving him an embarrassing tattoo on his back.