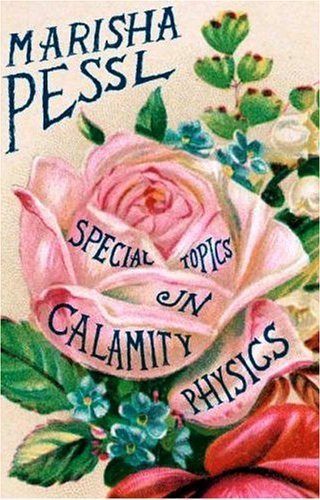 "Sometimes it takes more courage not to let yourself see. Sometimes knowledge is damaging - not enlightenment but enleadenment."
Advertisement:

The debut novel of Marisha Pessl.

After moving across America for years with her charismatic and intensely educated father as the only constant in her life, Blue van Meer finally gets to spend a solid year in a single town to finish high school. A mysterious teacher, Hannah Schneider, bumps into her and her father while they're shopping before school starts. She strikes up a conversation with them, and soon after invites Blue into the Bluebloods, a group of assorted teens she invites to dinner every weekend. Hannah and her Bluebloods all seem to be harboring some dark secrets. Soon Blue is drawn into intrigues and mysteries that lead her to re-evaluate her father and herself.

The book's two draws are its deceptively intricate plot and its unique writing style. Blue is compulsively literate, with a nearly perfect memory for the many books she's read and all the trivia her father has drilled her in. She frequently appends citations to her own descriptions (such as referencing an encyclopedia article on a hyena after describing someone's laugh), and the prose is generally witty and refreshing, with cliches ripped out by the roots and fresh metaphors seeded in their place (like that, except a lot better).