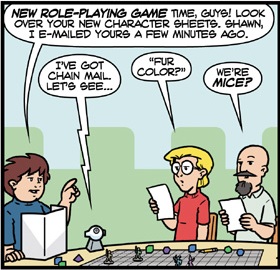 is a weekly webcomic by Aaron Williams (also the creator of Nodwick and PS238). It focuses on the roleplaying sessions of four tabletop gaming friends, all of them typical nerds in bad need of a life. The characters are:

Apart from tabletop gaming, the comic references various staples of the geek subculture, from collectible card games to SF series.