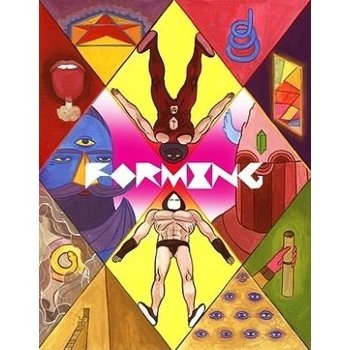 Clockwise from left to right: the Archangel Michael, Serapis, Lucifer, Atys
"Particles drift apart...exchange... Coming and going between the grass, trees, animals, planets...till we become something else entirely...not the sum of my experience...but the sum of all experience."
— Serapis
Advertisement:

Forming is a surreal fantasy/sci-fi/comedy webcomic written and illustrated by Jesse Moynihan of Adventure Time fame. Beginning with the arrival of Ancient Astronauts on prehistoric Earth, the story follows along as gods, men and aliens all become involved in an epic struggle with cosmic implications. Orchestrating things behind the scenes is Lucifer (aka the Adversary), who has been scheming to escape the planet ever since being trapped there by the Archangel Michael, as punishment for successfully escaping the infinite manifestation of God (aka Ain Soph, the Absolute) at the dawn of time and creating the universe as we now know it.

The art and writing draws from the influence of Alejandro Jodorowsky, Jack Kirby, epic poetry, alchemy, the occult and Progressive Rock, leading to a hefty dosage of Mind Screw. The style is largely Sophisticated as Hell; despite the subject matter of religion, intergalactic empires, ancient history, and complex symbolism, it makes use of frequent sexual and scatological humor, and the dialogue is filled with slang and profanity. Nonetheless the narrative showcases an extensive knowledge of ancient and obscure mythology and mysticism, among other subjects.

Forming is ongoing and available on Moynihan's website here

. Since 2011 it is also being compiled as a graphic novel, two volumes of which have been published. They can be bought here.